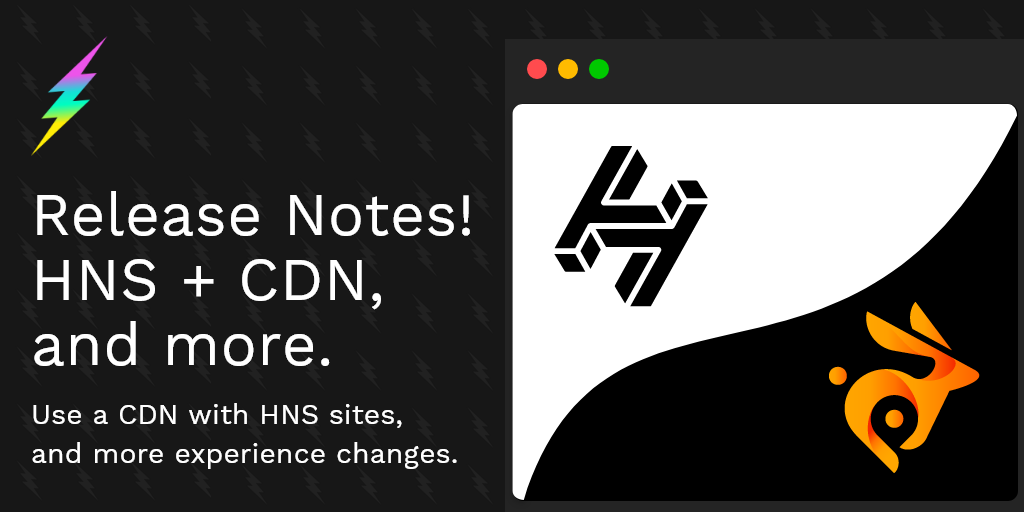 It’s time for another quick release ⚡ This week we’re bringing some changes to the Fleek.co platform, a little bit of adding here, some subtracting over there. As always, feel free to submit any requests or ideas to the team! 🔥

What do we have in store this week?

First up, we added BunnyCDN for HNS Domains to get us hoppin’ up to speed with our new content delivery platform for all Handshake domains. Lightning-fast performance at scale with no sacrifice in decentralization? Yessir. You can learn more about these CDN perks here.

We removed the DNS link setting for Internet Computer sites, because -as we said earlier- it is unnecessary. Setting up a DNS link would allow you to map a DNS name to an IPFS hash, and access the latest version of your site through IPFS. It’s an IPFS only thing and it’s not necessary on the Internet Computer.

We also removed the ability to buy domains through Fleek. In the end, it is a matter of Fleek not being a full-on DNS management suite that can provide a solid user experience without added overhead. We believe it’s better if users buy domains from other services that have a great set of domain management tools already, and then point it to Fleek as most users do anyways.

This opens up the question of what does this mean for legacy users that bought domains through Fleek? 🤔

What happens to Fleek-bought domains?

Legacy users! You can still use your Fleek-purchased domains, and if it’s been more than 60 days since you purchased it we can transfer the domain to a DNS provider of your choice. Just contact us through our support email ([email protected]) or Intercom in the app!

That is all for today’s release notes! Stay tuned for more updates and improvements! As always, you can hit us up in Twitter or Discord to let us know the features, improvements, or bugs you’d like to see tackled next 😎