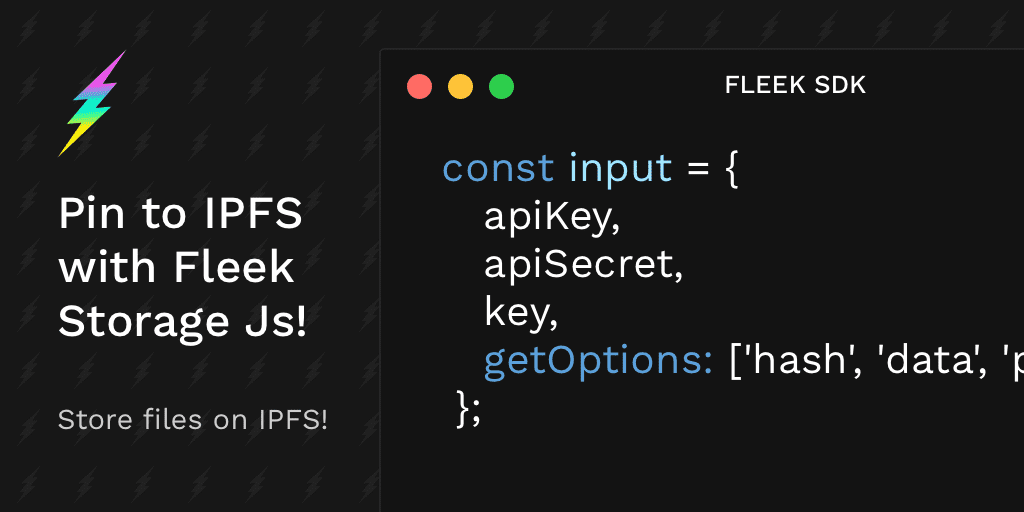 It’s now easier than ever to upload and pin files to IPFS thanks to Fleek Storage Js.

In this short guide, we will get you up and running with Fleek Storage Js so you can create the next awesome dapp.

We will cover the two most important actions: uploading a file and getting a file.

Fleek Storage Js can be installed as an npm package.

Then import the package in your code.

Using Fleek Storage Js necessitates an api key. A key can easily be generated on the web app https://app.fleek.co in the user settings.

Clicking on Create New Api Key will produce a new api key and api secret. Make sure to copy the api Secret, since it will only be shown once.

By default, every Fleek account comes with a bucket in which uploaded files go to. You do not have to specify a bucket when using Fleek Storage Js, because the SDK will use your default bucket if none is specified.

Fleek Storage Js provides the listBuckets method in case you wish to list all the buckets associated with your Fleek account.

fleek.upload: Upload and pin a file!

The upload method can be used to upload individual files on IPFS.

The method returns a promise. It requires the api key, api secret and the file’s data. If using node, fs.readFile can be used to get a file’s data from the computer.

The method needs a key, which is the identifier that you give to the file.

Files uploaded through upload will also appear in the Fleek Storage web app.

The file’s key can be in the format of a path, such as in the example above. In that case, the web app will display the file as part of a folder structure.

What does the returned data of the method looks like? Let’s take a look!

We also return the key and the name of the bucket containing the file. Finally, the field publicUrl corresponds to the url provided by Fleek to serve the file from a super fast CDN.

The get method is for fetching either data related to a file, such as the key, hash or public url, or the content of the file itself.

The method will return an object whose fields will correspond to the values specified in the getOptions field. The possible values for the getOptions array are data, bucket, hash, key and publicUrl.

Finally, there are cases when you might want to list all the files in a bucket and get their publicUrl, hash or key.

In that case, listFiles is appropriate. It works exactly the same as get, except it returns an array.

Here’s a Github repo that shows an example of usage for each Fleek Storage Js method.

Additionally, the Fleek Storage Js docs contains an exhaustive account of the inputs for each method.

Now that you know how to use Fleek Storage Js, you can easily upload and pin files to IPFS.

You can now unleash your creative powers on the decentralized web.